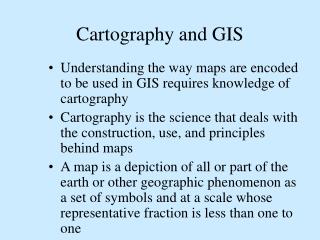 Cartography and GIS. Understanding the way maps are encoded to be used in GIS requires knowledge of cartography Cartography is the science that deals with the construction, use, and principles behind maps Applied Cartography and Introduction to GIS GEOG 2017 EL - . lecture-7 chapters 13 and 14. data for terrain mapping and

Cartography and Chronometry - . fmri graduate course october 9, 2002. why do you need to know?. spatial resolution

CARTOGRAPHY - . do all roads lead to rome?. circle graph. bar graph. where do maps fit into geography?. chart. line

THE MOROCCAN EXPERIENCE IN THE CENSUS CARTOGRAPHY AND THE GIS - . introduction cartography objectives methodology

CARTOGRAPHY - . the science and art of map making. some basics. a map is a two-dimensional or flat-scale model of the

THE MOROCCAN EXPERIENCE IN THE CENSUS CARTOGRAPHY AND THE GIS - . introduction cartography objectives methodology urban

Cartography - . the art and science of maps. Çatal hüyük , 'the forked mound‘ 6200 bc. babylonian map of the world.