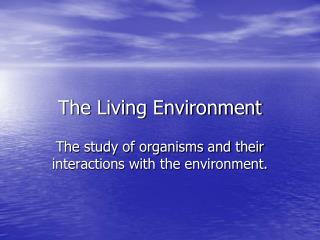 The Living Environment. The study of organisms and their interactions with the environment. Topics. Unit 1: Ecology Unit 2: The Cell Unit 3: Genetics Unit 4: History of Biological Diversity Unit 5: The Human Body. Unit 2: The Cell. Chemistry in Biology

Chapter 1 - . 1. which of these is not a property of all living organisms? a. organization b. acquisition of materials

What You Absolutely Need to Know To Pass the NYS Living Environment Regents Exam - . the le exam consists of

Living fishes - . the living fishes (not a monophyletic group) include: the jawless fishes (e.g. lampeys), cartilaginous

Ecosystems What effects do biotic and abiotic factors have on an ecosystem? - . diane gioia bell’s crossing elementary.