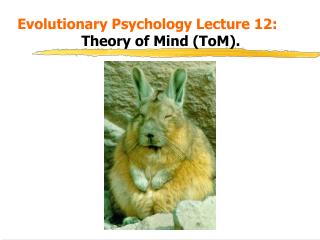 Evolutionary Psychology Lecture 12: Theory of Mind (ToM). Learning Outcomes. At the end of this session you should be able to: 1 . Evaluate the evidence concerning the existence of self-awareness and ‘theory of mind’ in animals.

Seeing UX through the Lens of Evolution : Unleash the superpowers inside of users’ mind! - . data analysis team / nexon

Animal Mind &amp; Evolutionary Psychology: Two sides of the same coin - . animal mind: how much are animals like us?

History of Psychology - . “what is the mind?” mind and science mind and body . before “psychology”. the “study

Sociobiology and Evolutionary Psychology - Explaining behavior. find the antecedent events that made the behavior take

Physiological Psychology - . consciousness and the mind-body problem. aristotle’s statement of the problem two or one?