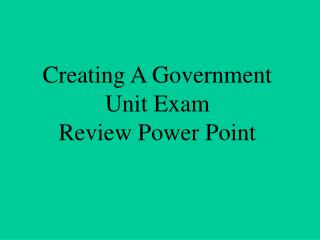 Creating A Government Unit Exam Review Power Point. Terms and Qualifications for Office. House of Representatives. 435 members Term - 2 years term / entire body up for re – election every 2 years Qualifications – 25 years old, 7 years a citizen and a resident of the state . Senate. Government Unit 1 Exam Review - . bill of rights. true or false: the supreme court has ruled that the death penalty

Creating a Power Point Presentation - K. bradley. keep in mind. try not to make changes to the layout so formatting

UNIT 1 TEST REVIEW POWER POINT - . settlement of the frontier. by the end of the civil war, american settlers occupied

Creating a Good Power Point Presentation - . career technology. what is wrong with the following slides?. are there any

Power Point review - . by: maddy kowal. what date was the declaration of independence written?. july 4 th , 1776. what

Power Point Review - . view as slide show to see animations . self explainatory. file extension of powerpoint as of 2007

Social studies review POWER POINT unit 24 - . david. 24.1. for what reasons were tensions high in europe in

Semester Exam Power Point - . questions that are definitions are not included . chapter 1. 1. science is different

Tips for Creating a Power Point Presentation - . design. experiment with the design features to get the look you want for

Creating Effective Power Point Presentations - . avoiding the pitfalls of bad slides. why is it important to create

Evolution Review Power Point - . the purpose of this presentation is to provide a basic overview of the concepts of

Creating a Government - . 1776 independence declared next 5 years no constitutional basis for congress. the resulting