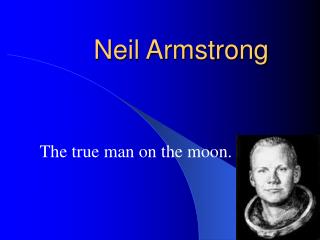 Neil Alden Armstrong - . radit 5a. about me. my name is neil alden armstrong i was the first man who walk on the moon. i

Neil Armstrong - . by adiyon. the early years…. neil armstrong was born in august 5 th , 1930 in wapakoneta, ohio. he

Neil Armstrong - . by alyssa hill about neil armstrong. his personal

Neil Postman - . neil postman. amusing ourselves to death (1985) he criticized the television industry for confounding

Working with Picture/Story Books The Wolves in the Walls Neil Gaiman - . lo: i can describe a character’s feelings