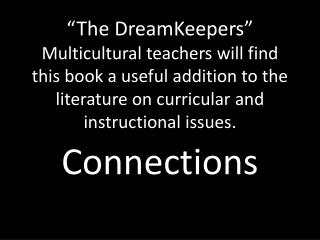 “The DreamKeepers ” Multicultural teachers will find this book a useful addition to the literature on curricular and instructional issues. Connections. Chapters 1-3. Chapter 1. A Dream Deferred Current climate: Do Now!! - . in your composition notebook thoroughly explain how you would solve the equation below: -3(x – 3) ≥ 5

Unity and Coherence in Academic Writing - Coherence? huh? i don't get it!. a paragraph is coherent if all its sentences

Language E – Unit 25 - . lesson one. connections recognize it!. walt. we are learning to expand our knowledge of vowel

Scheduling - . an engineering approach to computer networking. outline. what is scheduling why we need it requirements of