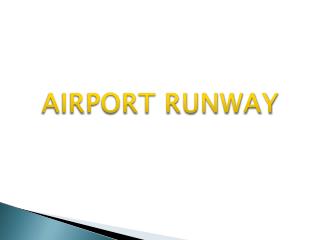 AIRPORT RUNWAY. Runway. Rectangular-shaped, paved surfaces on an airport, designed for the landing or takeoff of airplanes. Runways may be a man-made surface ( often asphalt concrete , or a mixture of both) or a natural surface ( grass , dirt , gravel , ice , or salt ). Runway. Why airport runway markings are crucial for flight operations? - Even the busiest air traveler would have been mesmerized

Runway Incursions - . runway incursions. what airways are doing to help prevent these serious events. presented at the nz