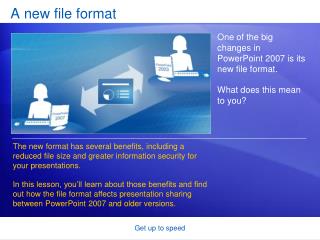 A new file format. One of the big changes in PowerPoint 2007 is its new file format. What does this mean to you?. The new format has several benefits, including a reduced file size and greater information security for your presentations. A new file format - . one more big change in the new version of word: an improved file format . what does that mean to

Method: LRC File Format - . a file that accompanies a piece of audio the lrc file consists of words and time stamps audio