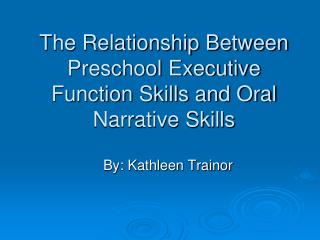 Relationship Skills - 1. make a firm decision to pursue the relationship. offer yourself completely to god. romans

ORAL COMMUNICATION SKILLS - . lecture i. communication is so much more than just the words we say. research by birtwhisle

Developing Relationship Skills - . what are some basic needs all people have in

Bonus Narrative—Media and Technology Skills - . [adapted from writing and grammar: communication in action ,

Lesson 1 Relationship Skills - Chapter 5. lesson 1 relationship skills. journal - 9/26/17. how do you use body

The Relationship between Dance and the Attention Skills of 18 Kindergarten Students - . ila de vuyst final project

The Relationship Between Executive Function and Language Abilities in Grade School Children - . by: jacquelyn liesen

Narrative Skills: Showing versus Telling - . “ showing ” and “ telling ” are two different ways to give your