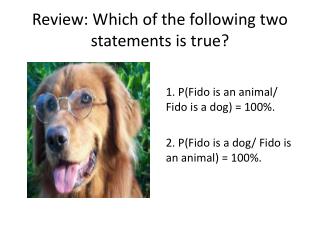 Paradoxes - . prepared by l. gilmore. what is it?. a paradox is an argument where the premises, if true, infers a

1. JavaScript Loops - . repeating code. a loop statement is a control structure that repeatedly executes a statement or a

Lab Safety Review - . loose clothing, such as sweaters, should be tied or removed before doing the lab. . true or false.

Properties: are statements that are true for all numbers. - Algebra: properties objective: use communicative,

True False Not enough info Not quite sure - A bug and the windshield of a fast moving car collide. tell whether the

7/8. RP/EE Unit Review - . given the equation, determine if the solution is “always true”, “sometimes true”, or

Autobiography - 9th may 2012. do now: decide if the statements about astro are true or false. you will be listening to

The Vienna Circle - . lo: i will know about the verification principle and its implications for religious statements.

Flow Of Control – Branching Statements - . 5-1 if &amp; if-else statements: if statements branch if a boolean check

Decision Statements - . control stuctures. sequential processing do in order d o together if / else statements 

EVALUATING BASIC LOGIC STATEMENTS - . intro to system design. what is a statement?. – a meaningful, declarative

Click on the statements that you believe to be true. - What do you know about bishop william morgan?. click on the

CS 201 Lecture 4 - . john hurley cal state la. if. if statements do just what you expect test whether a condition is true

Matter Review - . matter review. true or false for 100. physical and chemical changes observe the law of conservation of