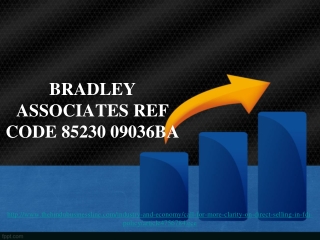 bradley associates ref code 85230 09036BA Source; http://www.thehindubusinessline.com/industry-and-economy/call-for-more-clarity-on-direct-selling-in-fdi-policy/article4756784.ece The Indian arm of US-based direct selling firm, Amway, has asked the Department of Industrial Policy and Promotion (DIPP) to clearly define multi-level marketing and direct selling in the consolidated foreign direct investment (FDI) policy so that there is no confusion on the legality of foreign companies operating in India in the sector. The Indian Direct Selling Association, that represents 18 direct selling companies including Amway, Oriflame and Tupperware, has also made a representation to the DIPP, on the issue. The policy talks about various forms of selling, including wholesale, single-brand retail and multi-brand retail, but is silent on direct selling, which is often used synonymously with multi-level marketing. The companies are seeking clarity, as they do not want to be held guilty for violation of Foreign Exchange Management Act rules and other fraudulent activities. “Amway and some other direct selling companies want that direct selling should also be bracketed under retail, defined clearly and included in the FDI policy. They want their operations to be 100 per cent legalised,” a DIPP official told Business Line. When Amway started its operations in India in the late nineties, the FDI policy was not well established and it was not really clear under what category they were operating, the official added. Direct sellers are also seeking to distinguish direct selling from multi-level marketing.