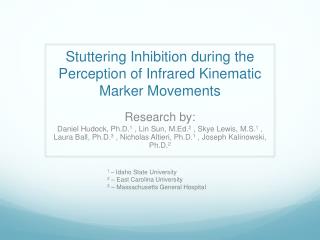 Stuttering Inhibition during the Perception of Infrared Kinematic Marker Movements

Stuttering Inhibition during the Perception of Infrared Kinematic Marker Movements

Single Slider Crank Chain - In a four bar kinematic chain there are four revolute pairs. if one of this pairs is changed

Perception &amp; Consciousness - . unit 2. how do we sense our worlds ?. learning objectives distinguish between