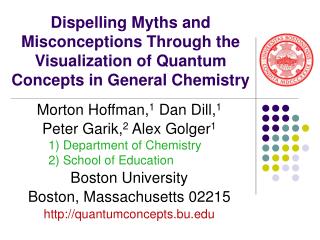 ICT and pedagogy – the myths and misconceptions - . ict tools and social software – what learning is taking place?

Quantum Chemistry - . describes the placement of the electrons in an atom by using the four quantum numbers: n or energy

Dispelling Myths and Fears about Accessing Employment: - Understand how to use work incentives to choose work! .

A STUDY OF HOW PRECURSOR KEY CONCEPTS FOR ORGANIC CHEMISTRY SUCCESS ARE UNDERSTOOOD BY GENERAL CHEMISTRY STUDENTS - . by

Herpes-Dispelling the Myths - . “the simple truth about a common problem” new zealand herpes foundation 2010. is it