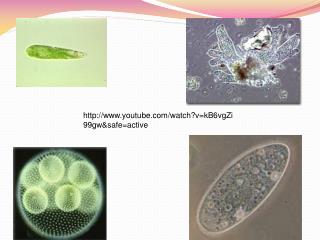 http://www.youtube.com/watch?v=kB6vgZi99gw&safe=active. The World of Amoeba , Euglena , Paramecium , and Volvox Cells. Let’s Learn About These Cells. What does it look like Special features Movement Feeding Reproduction. Amoeba. Amoebas are single-celled organisms

youtube/watch?v=QUW0Q8tXVUc - Http://www.youtube.com/watch?v=quw0q8txvuc. quiz for each question choose at least one

Chapter 4 - . cellular respiration. watch the following videos!!. to get a better understanding of how cellular