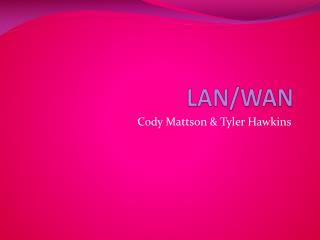 LAN/WAN. Cody Mattson & Tyler Hawkins. Definition of LAN. (LAN) stands for Local Area Network A LAN allows networking capability to a group of computers in close proximity to each other It is commonly used in an office buildings and schools ADVANTAGES OF LAN: SPEED