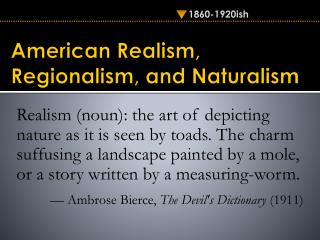 American Realism , Regionalism, and Naturalism. 1860-1920ish. Realism (noun): the art of depicting nature as it is seen by toads. The charm suffusing a landscape painted by a mole, or a story written by a measuring-worm. –– Ambrose Bierce, The Devil's Dictionary (1911). American Football Guide - Http://www.sportsline.com/nfl/picksheet/ - american football is a descendant of rugby and dates

Age of Revolution: From Neoclassicism to Romanticism and The New Realism Mrs. Harvey - 772 humanities. john singleton

The Sacred Cosmos: Christian Faith and the Challenge of Naturalism - . 4. human nature: embodied self and transcendent

The Sacred Cosmos: Christian Faith and the Challenge of Naturalism - . 2. origins: creation and the big bang. sunday,

American Regionalism, Realism, and Naturalism - . 1860-1920(ish). what is realism?. a faithful representation of reality