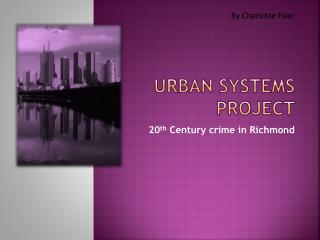 By Charlotte Fear . Urban systems project. 20 th Century crime in Richmond. Who were the people involved in crime during the 1900s-1930s and how did they affect the development of Richmond during that period?. First Paragraph – Squizzy Taylor

Approaches to and Experiences with Meeting Urban Sector Capacity Enhancement Demands : - Lessons from india and sierra

Digital Literacy Projects at Academy of Urban Planning - . may 12 th , 2010. academy of urban planning. aup is located in