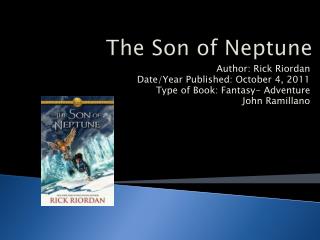 The Son of Neptune

The Son of Neptune

The Olympians: God and Goddesses of Ancient Greece - . greeks and their gods. “the universe created the god

The Lost Hero - . author: rick riordan. he was born june 5, 1964 in san antonio texas. he writes book about roman, greek

The Son of Neptune - . by grace. plot. percy jackson loses his memory, goes to camp jupiter, makes new friends, goes on a

The Mark of Athena Rick Riordan - . abraham tejeda 1b. percy jackson. percy is the main character in the book, and is

Neptune - . introduction. neptune is one of the mysterious distant planets on the outer reaches of the solar system.