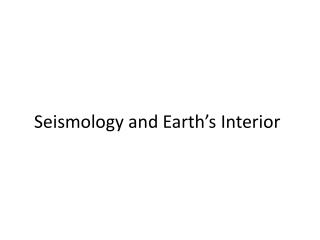 Which of the following statements regarding what we know about Earth’s interior is most accurate? - We have been able

INTERIOR OF THE EARTH - . the earth comprises three layers the crust the mantle the core. it is the lightest and upper

Plate Tectonics - . the dynamic interior of the earth. review of earth’s interior:. name, in order going from the