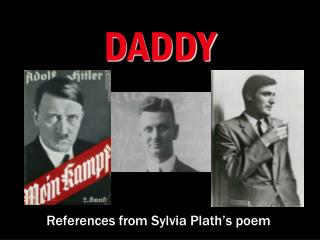 DADDY. References from Sylvia Plath’s poem. Holocaust imagery – why?. Plath was a child during WWII and saw the rise and fall of the Nazi party When her father died (1942), hatred for all things German was at a peak in the USA How a son or a daughter thinks of his/her Father at different ages… - . fropki.com. at 4 years…. ‘my dad’s

Are We There Yet, Daddy? - . by virginia

Teacher Daddy - The journey into parenthood &amp; the quest to become a better teacher. teacher daddy.

Travel – Military – Volunteer - How to get out of the states and make money doing it!. travel – military –

Poisonous Spiders - . by rebecca k. fraker teacher bulletin, 2010. are daddy long legs the deadliest spider?. no, that is

USD 20 Worth of Time - . a man came home from work late, tired and irritated, to find his 5-year old son waiting for him

How a son or a daughter thinks of his/her Father at different ages… - . fropki.com. at 4 years…. ‘my dad’s