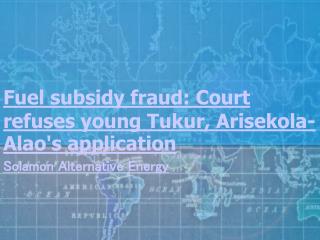 Lagos (WorldStage Newsonline)-- A Lagos High Court in Ikeja on Friday rejected the requests of Mahmud Tukur, son of Peoples Democratic Party (PDP) National Chairman, Alhaji Bamanga Tukur and Abdullahi Alao, son of Ibadan based businessman, Alhaji Abdulazeez Arisekola-Alao, for a leave to travel abroad while their trial over alleged fraud in fuel subsidy collection is ongoing. Justice Lateefat Folami, a vacation judge, told the accused persons including Felix Ochonogor, who are directors of one of the oil companies indicated for oil subsidy scam, Oil Marketing and Trading Companies (OM&Ts) to wait until their trial judge, Justice Adeniyi Onigbanjo resume from his annual vacation to hear the application. Gary Young Fraud - I am following up on the latest gary young scam in somalia. i wish to present the true facts about

Fuel Card Fraud Analysis - . a real example of how an employee allegedly stole from the colorado department of

Alter - . to change, become different or modify. historical fiction. genre of literature that takes place in the past and

Ulrich Alter, - Regulatory approach for safe and secure transport of radioactive material in germany and experience from