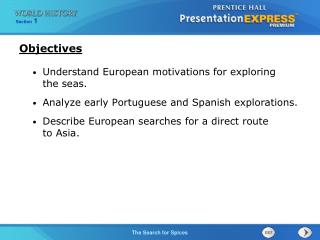 Objectives. Understand European motivations for exploring the seas . Analyze early Portuguese and Spanish explorations. Describe European searches for a direct route to Asia. Terms and People. Moluccas – an island chain in present-day Indonesia; chief source of spices in the 1400s

SEAS - . first meeting of the year (lots of info today so please bear with us) if you have any questions throughout, just

The Age of Exploration - . the early middle ages. during the middle ages, many europeans thought the world was a disk

SEAS - . special entry access schemes. what is seas?. for vtac applicants who have experienced educational disadvantage

19.1 Europeans Explore the East - . setting the stage: the curiosity of the renaissance prompts european exploration of

European Exploration - . the 3 g’s of exploration and the 4 corners model. european exploration. 1) why was portugal

European Exploration - . what factors encouraged the european age of exploration? . from the 1400s to the 1700s, europe

Reasons for Exploration - . what motivated the explorers to explore?.