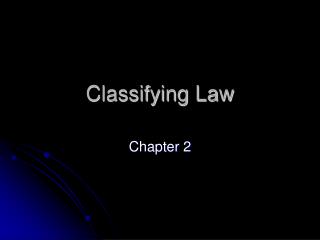 Classifying Law - . sources of canadian law. what do you think?. which of these situations involve law? explain how the

CLASSIFYING LAW - . classifying the law. our laws get divided or classified in a number of ways: substantive law – (the

Classifying Countries: - . liberal democracies, semi-democracies, and authoritarian systems. what do we expect to find in

Classifying Polygons - . lesson 9-3. classifying triangles. triangles have 3 sides and can be classified or named

Classifying Quadrilaterals - . on a cartesian plane. classify quadrilateral. we will be classifying five types of

Classifying Matter - . up to this point, we have only been modeling matter with simple particles the simplest units of

Classifying text - . nltk chapter 6. chapter 6 topics. how can we identify particular features of language data that are

Classifying Matter - . elements. an element is… the simplest pure substance one kind of material definite properties