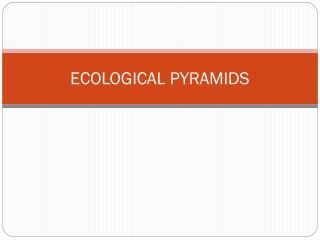 ECOLOGICAL PYRAMIDS. Ecological Pyramids. An ecological pyramid is a diagram that shows the relationship amounts of energy or matter contained within each trophic level in a food web or food chain. Ecological Pyramids - . energy pyramid shows energy as it moves from one feeding level in a food chain to another.  .

Population Pyramids - . global geography 12. population pyramids. a graph that shows the age-sex composition of a

ACIENT PYRAMIDS - . by santiago. some facts about the pyramids. the great pyramid of giza points very precisely to the

Man –Made Miracles - . : pyramids. the most famous pyramids are the [[egyptian pyramids]]; huge structures built of

PYRAMIDS - . by: evanle curry. the pyramid’s of giza. these pyramids are the oldest pyramids found. the location of the

Population Pyramids - . how we observe and document population trends. population pyramids…. … are illustrations

Pyramids Of Ancient Egypt - By: karina paraison 5-303. pyramids of ancient egypt. pyramids. the egyptian pyramids are

Food Webs and Ecological Pyramids - . review: what is a food web?. food chains and food webs show how organisms get

My Ecological Footprint - . by josh and nathan. introduction. our powerpoint presentation will include: what is an

The Pyramids of Giza - . by whitney burke. the pyramids of giza were built in giza, egypt. they were built roughly around

Construction Geometry - . pyramids surface area volume. pyramids. pyramids are solid figures with a polygonal base and