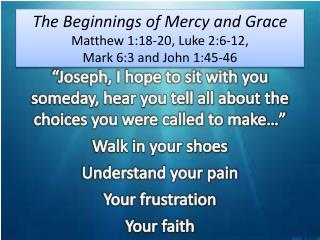 The Beginnings of Mercy and Grace Matthew 1:18-20, Luke 2:6-12, Mark 6:3 and John 1:45-46. “Joseph, I hope to sit with you someday, hear you tell all about the choices you were called to make…” Walk in your shoes Understand your pain Your frustration Your faith. Matthew 1

Luke 2; Matthew 3 - . far far away on judea’s plains. how well do you know the christmas story?. 1. shepherds saw the

Matthew, Mark, Luke, John - . old or new testament? arguments answered. since jesus lived under ot law. everything he did

Look Up for Your Redemption - . and when these things begin to come to pass, then look up, and lift up your heads; for

Sanctifying Grace - . all grace is god’s grace. we experience the one grace of god in many different ways. prevenient

Grace Murray Hopper - . pioneer computer scientist. where it all began…. she was born grace brewster murray on december

Muhammad (peace be upon him) &amp; His Message - Mercy to Mankind - . in the name of allah, most beneficent, most