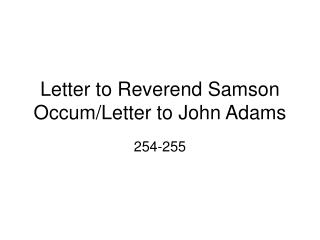 Dynamic Cover Letters - . writing a successful cover letter by nancy lobello. what is a cover letter. also referred to

LETTER (FUNCTIONAL TEXT) - . what is letter? have you ever got it? . what kinds of letter????? what is the letter

The Reverend Frederick C.B. Fairey - . a presentation by the victorian sea kayak club to the st kilda historical society.

Samson – God’s strength made perfect in weakness - . study 3 “moved at times between zorah and eshtaol ”.

Complaint Letter - . xi ap. 1. definition. complain letter is a letter that is written about disappointment of the

Reverend Fred Shuttlesworth - . “the most courageous civil rights fighter in the south” -mlk. by: muhammad hassanali.

Samson and The Lion - . who is the strongest man you know?. why is he strong? what makes them strong to you? what are

A Breakup Letter to the King - . requirements: tell the king that you are breaking up with him. explain the reasons why