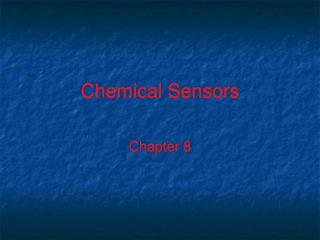 Chemical Sensors. Chapter 8. Introduction. Chemical sensors are very different Sensing is usually based on sampling Sample is allowed to react in some fashion with elements of the sensor Usually an electric output is produced Transduction can be multi-stage and complex

Sensors - . point your phone at the sky, and google sky map tells you which stars you’re looking at. tilt your phone ,

Chemical Sensors - . can we selectively detect chemicals? (what use is this?) can we detect classes of chemicals? (an

Sensors - . material taken from robotics with the boe-bot. where are we going?. sumo-bot competitions. devices that