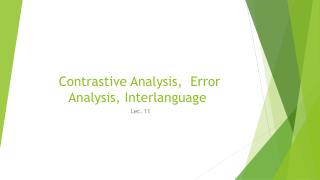 Contrastive Analysis, Error Analysis, Interlanguage . Lec . 11 . 1. Contrastive Analysis CA . CA is an approach to the study of SLA which involves predicting and explaining learner problems based on a comparison of L1 & L2 to determine structural similarities & differences. .

ITEM ANALYSIS - . purpose of item analysis. the process of examining the student’s responses to each item. the need to

Policy Analysis - . what is policy analysis?. multi-element process of assess and analyzing components of a plan of