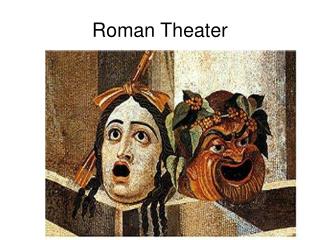 Roman Theater. The Theater at Pompeii. The theater complex at Pompeii is spectacular. The large theater held 5,000 spectators and the current structure dates from 1 A.D. Photographs from the air show a perfectly proportioned half circle. It’s huge!. The Theater .

Theatre Spaces - . all it takes is someone watching and someone performing. some of the first formal performing spaces

Greek Theatre &amp; the origins of Western Theatre - . ritual/storytelling. some believe that theatre grew out of

The Roman Colosseum - . the colosseum is located in rome, italy. also it’s on a hill top in europe. it’s in the

Theater History - . “possibly more true to history than history itself”. introduction. why should you bother to study

The Roman World of Plautus - . plautus: first writer of musical comedy. “a funny thing happened on the way to the