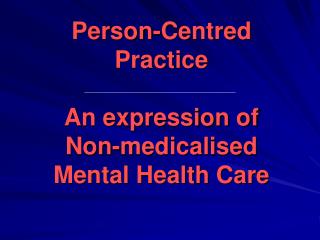 Person-Centred Practice A n expression of Non- medicalised Mental Health Care. The Person-Centred Approach Carl Rogers 1902–1987. The approach has been in continuous development from circa 1935 to the present day. To be radically nice. Rogers’ approach was radical because Person-centred care - . maggie eisner, august 2010. paired discussion. think about your own experience of a health care

AN EXAMPLE OF A PERSON CENTRED HEALTH ACTION PLAN - . person centred plan (pcp). ann completed her pcp on the computer

Person Centred Therapy - . personality. people are trustworthy, resourceful, capable of self understanding and self

Remaining person centred - . moyra riseborough care and repair scotland conference may 2013 . or - being human what you