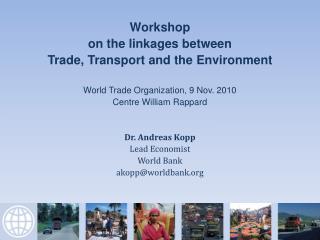 Workshop on the linkages between Trade, Transport and the Environment World Trade Organization, 9 Nov. 2010 Centre Willi

Workshop on the linkages between Trade, Transport and the Environment World Trade Organization, 9 Nov. 2010 Centre Willi What is meant by Sustainable Development? - . the goal of sustainable development is to enable all people throughout the

Trade in Value Added and Global Production Networks: - Wiod conference on industry-level analyses of globalization and

WTO-WORLD TRADE ORGANIZATION - . wto is an international organization which was founded on 1995. the wto was born out of

From Proteins to Populations: How Do We Integrate Biomedical Informatics across Kansas University? - Russ waitman

London, December 2008 Rosario Board of Trade - Investing in the hidrovía business opportunities in the waterway system