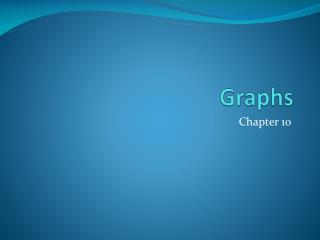 Graphs, graphs, graphs - . objective: given a position or velocity vs time graph or a motion map, create the appropriate

Graphs - . chapter 12. chapter objectives. to become familiar with graph terminology and the different types of graphs to

Graphs - . today i want you to help me make a graph . . i want to make a graph that shows the change in temperature

Graphs - . v. martinez. essential question. in what ways do we use graphs to solve problems in our daily lives?. line

Graphs - . education is what remains after one has forgotten what one has learned in school. albert einstein smitha n

Graphs - . chapter 13. preview graphs are an important mathematical concept that have significant applications not only