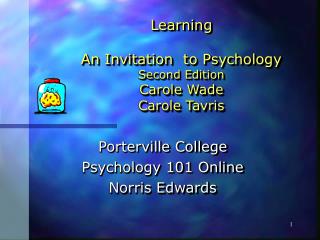 Learning An Invitation to Psychology Second Edition Carole Wade Carole Tavris. Porterville College Psychology 101 Online Norris Edwards. Learning Objectives:. By the end of this unit you should be able to: Unit 4 Psychology - . plasticity of the brain. brain plasticity. the brain’s ability to reorganise and relocate neural

TEMPUS INFODAY Portugal, an Invitation - . tashkent 06/10/2012. lisbon. legend has it that lisboa was founded by ulysses.

Chapter 1: Historical Background of I/O Learning Objectives • Explain how I/O psychology relates to the profession of Learning! - . psychology ms. rebecca. do now:. what are some good habits you have? ex: brushing your teeth after eating,