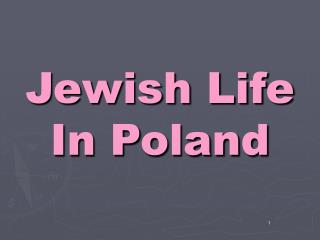 Jewish Life In Poland. 1. Wysock, a tiny village in Volhynia, 1937. 2. Text. Text. A well in a rural area of Volhynia, not far from the Polish-Russian border. 3. Mountain Jews in Rosachacz, a village in the Eastern Beskid range of the Carpathian mountains. 4.

The Jews of Interwar Poland, Romania and Hungary - . scott masters crestwood college. who are the jews of

The Cuban Jewish Community - . adath israel synagogue from the street. the first jews probably arrived to cuba after the

Business process offshoring in Poland Opportunities for the Polish companies and the economy - . mariusz-jan radło,

From the Archives of the YIVO Institute for Jewish Research - How did jews resist the holocaust?. from the archives of

Modern Anti -Semitism in Poland - . by noah botman. polish jewry today. a 1900 census showed that there were over 1.3

Judaism: The Jewish Religion and Culture What does it mean to be Jewish? - . judaism is…. “ a 4000 year old tradition