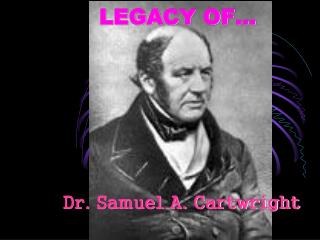 LEGACY OF…. Dr. Samuel A. Cartwright. HISTORY. Cartwright was born at Northampton on November 3, 1793. In 1812, he began his medical training as an apprentice to Dr. John Brewer. He attended the University of Pennsylvania Medical School. Dr Edmund Cartwright - . henry fehr. not a clue. sculptures. what are they? what are they used for? what subjects are

A POWER FOR A TEAM By Dr. Samuel Chand - . 1. the power of . apology. to give and receive forgiveness and not hold the

Two - Jim Cartwright - . the play ‘two’ was written in 1989 and it included a play of about 14 characters but only

Adrian Cartwright-Bain - Damaged ?. adrian cartwright-bain. what is d amage? involves change in nature and some form of

Cartwright, “Scattered Objects” - . following hobbes, “a body is that, which having no dependence on our thought,

LEADERSHIP BENCHMARKS Dr. Samuel R. Chand - . a leader is a servant who takes the initiative to serve and serve well. we

A Vet Can Help By Holly Cartwright - . the vet helps fix pets. . t he vet helps pets get well. . the dog bent his leg. .

CARTWRIGHT CENTRAL PUBLIC SCHOOL - . cartwright coyotes. school goal: to help you in your transition to high school in a

The Cartwright Law Firm - "in business for more than 60 years, the cartwright law firm, inc. is nationally