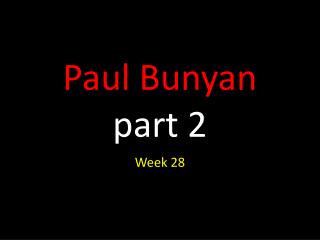 Paul Bunyan part 2. Week 28. (Thanks to Clare Pechon , Independence, Lousiana ) for voc slides. behemoth. Something called a behemoth is extremely large. What animal is a behemoth?. cordially. To say something cordially is to say it in a warm, friendly way. Paul Bunyan part 3 - . week 28. as we read the next selection, look for features of expository text such as facts,

Paul Bunyan - . paul bunyan is a 19 th century american tall tale about a logger with unbelievable strength and size. he

Paul Bunyan - . by. characters. paul bunyan is exaggerated in his size and strength. babe is a big blue ox that becomes

Paul Bunyan &amp; Babe the Blue Ox - . day one. are there ever situations in which it is not good to be softhearted ?

Bunyan, lecture 3 - . analyzing particular episodes &amp; asking questions. i. “the soul of religion is the