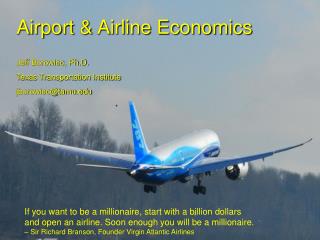 Airport & Airline Economics Jeff Borowiec, Ph.D. Texas Transportation Institute jborowiec@tamu.edu. If you want to be a millionaire, start with a billion dollars and open an airline. Soon enough you will be a millionaire. – Sir Richard Branson, Founder Virgin Atlantic Airlines. Outline. Competing for Funding in the Biomedical Sciences from the National Institutes of Health &amp; Elsewhere - . december