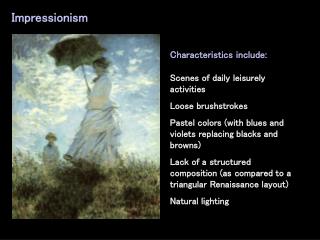 Impressionism. Characteristics include: Scenes of daily leisurely activities Loose brushstrokes Pastel colors (with blues and violets replacing blacks and browns) Lack of a structured composition (as compared to a triangular Renaissance layout) Natural lighting. The Impressionists. Green Natural Forskolin will help You to Loose Belly Fat - Visit us :

Brushstrokes - . painting with action verbs. be – is a verb it is a linking verb and a helping verb. sometimes using a

Impressionism - . there are no lines in nature, only areas of color, one against another. edouard manet. claude monet.

Impressionism - . by: capri pimental. it is a 19 th - century art movement. it was influenced by paris-based artists. the

Impressionism - . impressionism. painters were more concerned with the technique of suggesting light and color than with

What Does Technology Integration REALLY Look Like? - . agenda. getting to know you? myths and realities step by step room

“God's Ways are behind the scenes ; but He moves all the scenes which He is behind.”  - - j.n. darby. paul creates

Behind the SCENES – 127 HoURS - Http://www.movieweb.com/movie/127-hours/behind-the-scenes-footage-part-2. behind the

Daily Double - . audio daily double. place your wager!. you have been selected to play nclex jeopardy. remember this is