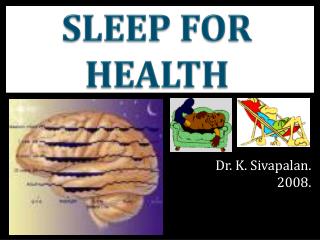 SLEEP FOR HEALTH. Dr. K. Sivapalan. 2008. SLEEP. We apparently spend one third of our lives in sleep. Until the 1950s, most people thought of sleep as a passive, dormant part of our daily lives. Sleep is the natural state of bodily rest observed throughout the animal kingdom. SLEEP HEALTH - . why lack of sleep is a threat to our health and our overall wellness. . goal:. “to increase public

Good Sleep & Good Oral Health - I wish to adopt healthy habits in my routine because that will lead to a happy sleep.

Unit #2 Health, Sleep, Nutrition - . nutrition. what color foods are the most nutritious? green what vegetables are the

Help Advance Sleep Health For World Sleep Day(R) On March 13, 2020 - 1888pressrelease - having a hard time getting out of