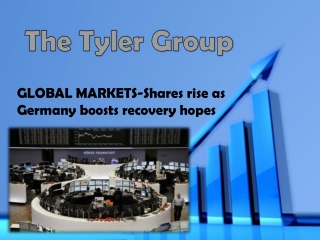 European shares saw their strongest gains in a week on Tuesday after a pick-up in German economic sentiment data bolstered hopes the region's biggest economy would rebound quickly from its recent weakness. Wall Street was expected to return from a three-day weekend with further gains, as it looks to build on the seven straight weeks of rises that have pushed the S&P 500 to a five-year high. Following last week's GDP figures showing that the euro zone saw a weaker end to 2012 than expected, Germany's ZEW survey of investors and analysts brightened the mood as it comfortably beat expectations to hit its highest level since April 2010. "Financial market experts have made their peace with the weak fourth quarter of 2012," said ZEW president Wolfgang Franz after its headline figure jumped to 48.2 points from 31.5 in January. "In their opinion the German economy faces less of a headwind from the euro crisis than throughout the last months." European stock markets, which had lost around 1.5 percent since the end of January, extended early gains after the data to put them on track for their biggest advance in a week. The FTSEurofirst 300 had added 0.9 percent by 1330 GMT, led by a 1.5 gain on Paris's CAC-40 and 1.2 percent rises on Frankfurt's DAX, in Milan and in Madrid. "Even if the real economy only lives up to half the expectations, ... any fears of a technical recession should turn out to have been unjustified," ING economist Carsten Brzeski said of the German outlook following the ZEW survey. The euro also rose and German government bonds turned negative after the figures, though both moves proved to be brief. Recovery of Shares - Muds recovery team can take care of all the process and documentation for iepf claims, transfer /

Rise of Nazi Germany - . how a psycho came to power. a democratic government set up as wwi was ending germans of all

The Rise of Nazi Germany

Global Markets - . world trade. u.s., europe, canada, china, japan together are about 2/3 of world trade not all trade is

The Nazi Rise in Germany - . world war ii and the cold war. introduction. the socialist leaders of the weimar republic