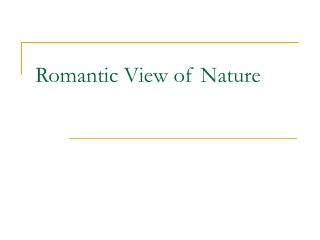 Romantic View of Nature. Romantic Encounters with Nature. Personification of Nature Identification with Personified Nature Elevation of Persona’s Spirit—Rebirth: feelings of youth Perception of the Spiritual in Nature Expansion of Persona’s Vision to a Larger Humanity.

S8P1. Students will examine the scientific view of the nature of matter. Distinguish between atoms and molecules - Page

Human Behavior - . nature, nurture and human diversity. our behavior is often characterized as “human nature.”. what

Attachment and romantic relationships - . attachment: from the cradle to the grave. hazan &amp; shaver, 1994.

Sonnet #43 (How Do I Love Thee?) - . elizabeth barrett browning taken from the sonnets from the portuguese. elizabeth