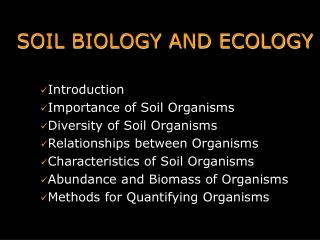 Soil Biology - . who is down there and what do they do. learning objectives. list the major groups of soil organisms …

Bird Biology and Ecology - Northern flicker. bird biology and ecology. i. ornithology is the science of the study of

Ecology – Honors Biology - . 2010. hierarchy of organization. biosphere : combined portions of the planet in which all

Benefits of Soil Organisms - . what kinds of plants and animals live in the soil?. 1) bacteria: most numerous and

Chapter 2 Principles of Ecology - . section 1: organisms and their relationships. section 2: flow of energy in an