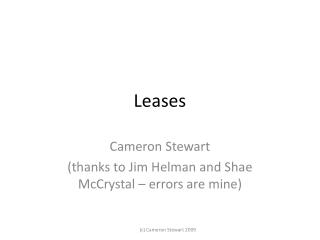 Leases. Cameron Stewart (thanks to Jim Helman and Shae McCrystal – errors are mine). Definition. A lease is an agreement to allow someone to use land for a period

Interaction of Mortgages and Leases - . why would a mortgagee want possession of “income property” prior to

Chapter 23 - . leases and property types. what is a lease?. legal contract between tenant (lessee) and owner (lessor) for

Lease pricing - . lease pricing. distinction between owner-occupied and tenanted commercial property our focus is on the

Accounting for Leases - . acctg 5120 david plumlee. what is a lease?. “ a lease is a contractual agreement between a