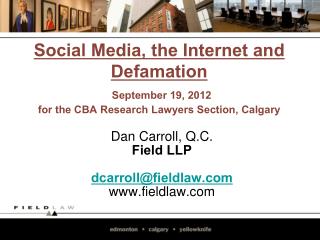 Social Media, the Internet and Defamation September 19, 2012 for the CBA Research Lawyers Section, Calgary. Dan Carroll, Q.C. Field LLP dcarroll@fieldlaw.com www.fieldlaw.com. Disclaimer. This presentation is intended for general educational purposes only and is not legal advice.

DEFAMATION - . unlike most of tort law, defamation has little to do with protecting individual or communal security. nor

Teens and the Internet - . the exciting, scary and reassuring news about social media and internet use. agenda. who am i?

Social Media 102: How to Find the Right Social Media Tools For Success - . 1. why social media?. 2. the future of the

Defamation - Cyberspace law:. defamation. introduction. in general terms the following must be present to establish

DEFAMATION - . monday 25 july 2011. do now answers. a defamatory statement is an untrue statement that injures a

Social Media: Find Your Voice In Social Media by Chris Abrah - Is your voice being heard through social media? join a