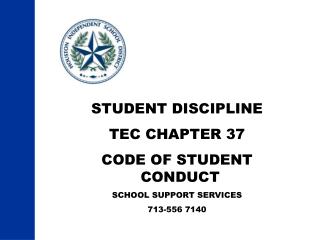 Code of Conduct for Students - . article 60 of kvs education code a) the following acts and conducts on the part of

Cooperative Discipline - . revenge and power!. stages. there are three different stages and techniques in power/revenge

Realising Maori student and Pasifika student potential - . a differentiated approach. secondary advisors will include a

CGMSC Student Expectations &amp; Discipline - . 2011-2012. attendance expectations. you are expected to be at school

The Teacher, the Law, and the Code of Ethics - . overview of legal guidelines. agenda. levels of governance code of