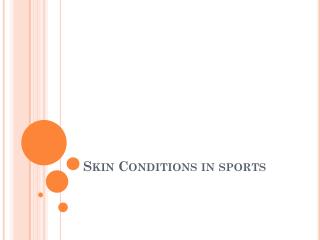 Skin Conditions in sports. Introduction…. The skin , , is often involved in sports injuries, which range from simple wounds to a variety of This chapter discusses the and describes the categories of wounds and their care Obviously, whenever a potential exposure to blood exists 6 Skin Conditions You Should Know - Do you know that the skin is the largest organ in the human body? it has a total area

Haut: 100% Skin Friendly - Cosmetics enhance your performance and help you in looking beautiful and stunning. all men and Protect from Skin Disorders with Homeopathy - Skin disorder is a major problem in the summer. these all because for the

Parkinson’s in Boxing and Other Full-contact Sports - . by andy diaz. what is parkinson’s disease. parkinson's

Skin Problems in teenagers - . skin problems can be a result of accidents or something causing an infection in the skin.