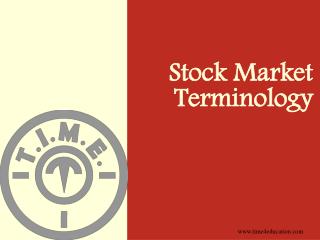 Stock Market Terminology. What is a stock ?. A type of security that signifies ownership in a corporation and represents a claim on part of the corporation's assets and earnings. There are two main types of stocks : common and preferred They are also known as "shares" or "equity".

Stock Market Basics - . what are stocks?. stock is ownership in a publicly traded company. stock is a claim on the

The Stock Market - . what is a stock?. a  stock  represent a share in the ownership of a company. if you own a

The Stock Market - . the stock market appears in the news every day:. it is the organised trading of securities (a

What is stock? - . equity =ownership of part of corporation stockholder =person who buys stock price of stock =determined

Top 10 Best Stock Market Investment Research Sites - A stock market is also known as the equity market. it is a public

Stock Valuation - . corporate finance. dr. a. demaskey. learning objectives. questions to be answered: what are the

The Recent Developments of the Libyan Stock Market - . presented by: mr. suliman salem al-shohomy chairman of the libyan