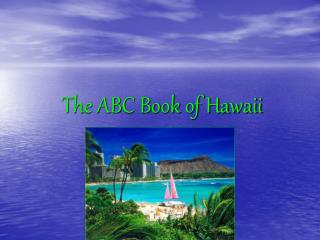 The ABC Book of Hawaii The ABC Book of Hawaii. A~ Animal. Hawaii's state animal is the Monk Seal. Mature Monk Seals have a gray coat that turn brown with the weather. Young seals are silver with a white stomach, chest, and, throat. B~ Bird.

The ABC Book of Hawaii

Bell-ringer: - . from sea to shining sea. the united states stretches 2,807 miles across the middle part of north america

THE BOOK OF LEVITICUS - How to approach a holy god. the book of leviticus. the historical setting israel is at the foot

Hawaii - . sunny cheema spring 2013. outline. the vacation place i want to go to is hawaii i will travel to hawaii by

Parts of a Book - Claudette curl, 2003. parts of a book. each book in the library has many parts. you will learn five

Objectives - . volcanoes of the island of hawaii seven shield volcanoes types of volcanoes descriptions and

Entrepreneur SAE Book - The entrepreneur sae book is designed is used by anyone investing their time, effort, and

A Fun Personal Finance Book - . by wise bread the #1 personal finance blog. secrets to living the good life without Abc Dreams Usa - Our website : http://www.abcdreamusa.com/f2-visa-guide/ applying for a visa to a foreign country can be