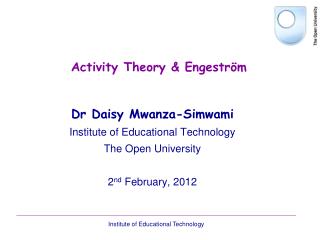 ACTIVITY THEORY AND YOUR PROJECT - . mary wendt. history. the need for activity theory. the problem with hci. there

Why Activity Theory in HCI? - . reaction against what was viewed as the limitations of hci the role of the artefact

Institutional Economic Theory Economics 451 University of Missouri-Kansas City - . these are ways of thinking about

THEORY &amp; THEORIZING - . theory . a theory is a set of related propositions used to classify and explain aspects