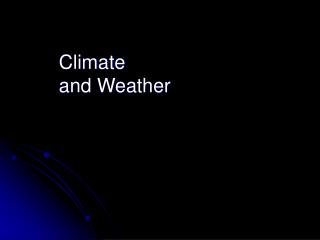 Climate and Weather. Climates and Seasons. The different climates and seasons we have on Earth are decided mainly by… where our planet lies and how our planet moves around the Sun. Our location in the Solar System. Our Earth is the third planet from the Sun.

Global Climate - . systems and biomes. weather vs. climate weather condition of the atmosphere at any place and time

Weather and Climate - . bellringer: describe how the water cycle plays a role in weather. compare and contrast

Chapter 12 - . meteorology. lesson 4. the causes of weather. think about it…. where does the weather in our country

An Introduction to Earth â€™ s Climate - . a web seminar for the nsta community by the ucar office of education and

Climate and Weather - . weather. combination of temperature, precipitation, cloud cover, and wind experienced on a

Weather Unit 2 - . meteorology and the nature of storms. weather vs. climate. weather – short term variations in

Weather and climate - . weather. weather refers to the daily environmental conditions we experience around us. it can

Climate &amp; Weather . - Camilac. climate &amp; weather . what is w eather?. weather is the state of the

Weather - . weather and climate. weather denotes a short term behavior of the earths atmosphere hours to a week applies

What’s up with the Weather? - . climate change, extreme weather, and the ( mis )representation of scientific

Climate and Weather - . climate is average weather. biosphere. anything that is alive lives in the biosphere interacts

Weather and Climate - . by: brianna shields november 15, 2005. do now. listen to this podcast:. what is the difference